Back by poplar demand Ami will be performing her “One Woman Show” at the Port Fairy Folk Music Festival 2015! “A festival loves to book an artist such as Ami Williamson. She’s a class act with poise, passion and ‘personality plus’, she has the power to own her show – the stage and the audience’s adoration. Ami can’t help it if she’s also beautiful and charming, but we’ll put up with anyone who creates a buzzfest – as she can. Pssst…..check out the wall of arty letters after her name. Phew!” – (Jamie McKew – Festival Director & Programmer at Port Fairy Folk MUSIC Festival) 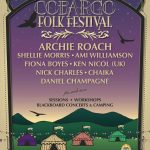